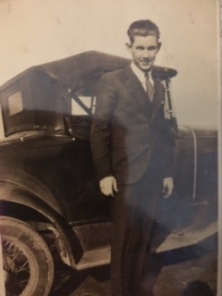 Remembering my dad today has brought to mind a question he loved to ask—tell me what The Great Depression, the big city, Bonnie and Clyde, and a red dress have in common. Now on the surface they have nothing in common, but its dad’s story!

My mother and dad, Homer Hayes and Bernice Davenport, got married in 1932, right in the middle of the Great Depression. They left the farm and moved to the big city of Dallas, Texas. More than 15,000 people were out of work and on relief, and all were searching and scrambling to find work. No job was too small or too menial. If it paid a few cents, someone would grab it and be grateful. A job meant food for their families.

Dad was one of the lucky ones who found work. From 1933 until 1938 he delivered ice for fifty cents a day, now those were ten-hour-days back then—do the math. He started before dawn, loaded the blocks of ice into a truck, drove over the dirt streets, and stopped at the houses on his route that had an ice card in the window. Ice cards had a large number on each side, 25, 50, 75, or 100. The card was placed in a window showing how many pounds of ice that was needed. The ice man would grab the block of ice with huge tongs and throw it over his shoulder which was covered by a leather sheath. He’d haul it in the house and place it directly into the icebox.

Iceboxes were really “iceboxes”, not refrigerators. They were made out of wood and the part where the ice was stored was lined with tin. There was a hole in the bottom of the unit so that as the ice melted the water could drain into a pan. I remember mother sliding the pan out and emptying the water on her flower bed. Food was kept cool, not cold, and nothing was frozen. Children would chase the ice truck down the street in hopes of getting a few chips of ice to eat, a definite treat in hot Texas summers. Air conditioning was sitting out in the yard under a shade tree!

Dad loved to tell how he could have bought as much land as he wanted in the Trinity River bottom for less than fifty cents an acre. The first levee was built in 1928 in an attempt to control the flooding of the river. Dad always said that there were two reasons he didn’t buy any of this land. First, the Trinity River was like the Mississippi, it had a mind of its own, and you never knew when it would flood. And second, fifty cents was a whole day’s wages, and he had to feed his family and pay rent.

The next job dad got was climbing poles for Dallas Power and Light Company at a dollar a day. His salary doubled. He felt like he had struck it rich. Linemen were always on call as soon as bad weather hit the city. We knew that when the storms came and the wind blew hard, the phone would ring and dad would be called out in the middle of the night to repair lines. I remember crawling in bed with mother during those times. It always scared me to think about dad climbing the pole to work on electric wires during a storm.

World War II began as the Depression was ending in 1941 and large numbers of men rushed to enlist. Patriotism and love of America was at its height. DP&L froze a small crew of linemen deemed necessary to keep the city running. Dad was one of these men. After Pearl Harbor on December 7, 1941, he tried to join again, but was still on DP&L’s frozen list. He always regretted that he didn’t serve in the war.

On Sunday afternoon, December 7, 1941, I was at my best friend’s house and we were on the front porch playing jacks when her father came out and said, “Girls, I need to talk to you, come on in the house.” His gentleness and concern while he was telling us made an indelible impression on me, my first glimpse of the thread of God’s love. He started by telling us that we were all right, we were safe, and we didn’t have to worry. Then he told us about the attack on Pearl Harbor and that America was officially at war. He didn’t scare us, but he did explain what it meant for our country to be at war.

Nearly every family we knew had someone in the war. Every day when my friends and I walked to and from school, we would watch the windows of the houses we passed for a Service Flag. If someone from that house was in the war there would be a blue star on the flag hanging in the window, sometimes more than one. If a family member was killed, the blue star was replaced with a gold one representing the ultimate sacrifice. A silver star stood for someone who had been wounded in action. The war and what sacrifice meant became very real to us. Every time we saw a gold star appear, we’d rush home to tell our parents.

Dad stayed with DP&L until the mid-forties when he got hit by lightning. A lineman was strapped to the pole when they climbed. Picture a heavy leather strap wider than a belt going around the pole and the man’s body. The man had spikes on his boots, and he climbed by slamming the spikes into the wood pole and pushing back on the strap for support. When a man was working on the electric connections at the top of the pole, he dug the spikes in and leaned back on the strap so that his hands would be free. This is where dad was in the middle of a dark and stormy night when lightning struck him. It hit dad on the hand, traveled through his body and came out his foot leaving him unconscious. When the other men that saw this happen, saw dad hanging limply by the strap, legs dangling, they thought he was dead.

There were no big trucks with extension ladders or buckets to lift men up and down so one of the crew climbed the pole and carried my unconscious, over two-hundred-pound dad down the pole in the midst of a blinding thunderstorm and frequent lightning strikes. It was only by God’s mercy that dad and his friend survived. There was a small hole in dad’s thumb where the lightning went in and a very large exit wound where it came out his foot. The rubber sole on the boot he wore was completely melted. Do I need to tell you that dad never climbed another pole? After that, he went to work for a company wiring new homes, repairing old ones, and staying on the ground.

Yes, dad came to Texas in a covered wagon when he was a little boy.

And yes, he broke his back when he fell off a ladder and then drove home to tell us.

Yes, it’s true — mother and dad sat and talked with Bonnie and Clyde one night at a watermelon stand on Jefferson Avenue in Dallas way back in the 1930s.

And yes, the threads of God’s love were stamped indelibly on and around my life even though I wasn’t aware of it at the time.

So where does the red dress come in, you ask.
Well, truth will out — my mother wore red when she and dad married
in 1932.

Betty Kerss Groezinger, a native Texan, was born in Dallas. She was a legal researcher for President Harry S. Truman in Independence, Missouri, taught business courses at Rockhurst College in Kansas City, Missouri, and on her return to Dallas, she worked for more than a decade with advertising agencies. She has been a resident of Irving, Texas, since 1965, and is now working on the sequel to The Davenport Dilemma.
View all posts by Betty Kerss Groezinger →
This entry was posted in Dallas, Fathers Day, General, Great Depression and tagged Bonnie and Clyde, covered wagon, Dad, Dallas, DP&L, Father's Day, God's love. lightning strike, Great Depression, iceman, lineman, Texas, WWII. Bookmark the permalink.

10 Responses to Dad’s Story…The Great Depression, Bonnie and Clyde, and a Red Dress