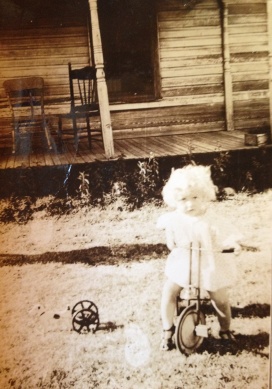 Watching the news the past few years and again this last week, I am deeply saddened by America and the disconnect people have with one another in today’s world and how intensely scary it must be to young people.

I am reminded of those simpler years and how blessed I was to grow up then. We didn’t have fancy homes or much money during the 1930s depression years, but we had each other. The love of family was the most important thing in our world. We ate together, talked together; played games together, worked in the garden together, took walks in the evening together, went to church together, and cried together. It was an unselfish time, a time filled with absolutes and God was the supreme authority. Right and wrong were determined by what God said.

When the school bell sounded we sat down in our classroom and listened to the morning announcements over the PA system. The principal started the school day with a prayer, all heads bowed. Next, we stood with our hands over our hearts and repeated:

I Pledge of Allegiance to the Flag of the United States of America
and to the Republic for which it stands,
one Nation under God, indivisible, with liberty and justice for all.

And we understood God was watching.

The Ten Commandments (Exodus 20:1-17) were posted in every class room. When a child misbehaved at my school the teacher directed him to figure out which Commandment he broke, and then they talked about it. If the child was unrepentant he ended up in the principal’s office, and an attitude adjustment was rendered. The parents were always notified and that was scary because we knew our parents would reinforce the principal’s action when we got home. Most parents supported the school.

Absolutes, black and white, right and wrong, children knew exactly where they stood. If you broke the rules you were in trouble.

The boundaries started changing with the U.S. Supreme Court’s removal of prayer from our nation’s schools. On June 25, 1962, thirty-nine million students were forbidden to do what they and their predecessors had been doing since the founding of our nation, publicly calling upon the name of the Lord at the beginning of each school day. The boundaries continued changing in 1980 when the Supreme Court ruled against the posting of the Ten Commandments in public schools.

Hindsight is amazing in its ability to clarify. Looking backward, it is easy to see that the value system of America started changing the instant prayer was taken out of schools. The downward spiral accelerated when the Ten Commandments were removed and a hole was forged in the soul of America as we lost our firm foundation. We all have a basic need to know where we stand and what we stand on is solid.

Oh, yes, the children of the 30s, 40s, and 50s rebelled against rules and restrictions. We challenged them just as the children of today do. It was all part of growing up, pushing the limits, testing the waters. But when problems came, we liked the boundaries of home, family, and God although we never admitted it. They surrounded, protected, and made us safe.

I look around at the world today and it appears we have traded family and our Lord for the love of self and “Me, Myself and I,” all wrapped up in uncontrolled anger and pain. Billy Graham once said, “Each generation faces different issues and challenges, but our standard must always be measured by God’s word.”

In this world of changing values, a world where nothing remains the same, where history books are being altered to reflect political correctness, how comforting it is to open the Bible and know that God doesn’t alter His Word to fit this world. His Word is absolute, carved in stone.

We can read His Word and know where we stand and what we stand upon. These boundaries show us a God who loves us, who wants to save and protect us and who sent His Son Jesus Christ to pay for our sins, and who desires for us to love Him back and respect His infinite authority. These boundaries reach deep into our soul and offer us sanctuary in a world that has very little security.

If we listen very carefully, we can hear God’s voice echoing across the centuries as He assures us His Word is unchanging and eternal; His Word stands firm in the heavens, and His faithfulness continues through all generations.

“The grass withers and the flowers fall,
but the Word of God stands forever.” -Isaiah 40:8.

Right is still right and wrong is still wrong!
And God is still watching…

Note: Picture at the top: Betty around 1-1/2 years at her great grandmother’s home in Blue Ridge, Texas.
Note:  Parts of this story were first written in 2015.

Betty Kerss Groezinger, a native Texan, was born in Dallas. She was a legal researcher for President Harry S. Truman in Independence, Missouri, taught business courses at Rockhurst College in Kansas City, Missouri, and on her return to Dallas, she worked for more than a decade with advertising agencies. She has been a resident of Irving, Texas, since 1965, and is now working on the sequel to The Davenport Dilemma.
View all posts by Betty Kerss Groezinger →
This entry was posted in America, Changes, General, prayer and tagged 30s, 40s. 50s, Absolutes, America, Billy Graham, boundaries, changing values, God, Jesus, Pledge of Allegiance, prayer in school, Right and wrong, schools, Ten Commandments, Word of God, young people. Bookmark the permalink.