At My Mother’s Table … 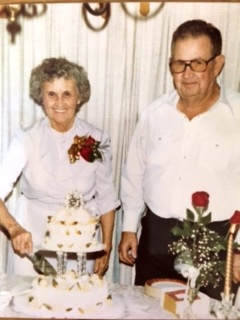 Have you ever wished you could go back to childhood and eat another meal at your mother’s table? I would so love to do that one more time.

There was certainly nothing fancy about the little house where I grew up in Dallas, Texas, but thinking about it brings back golden memories of my youth and lots of wonderful meals. Unlike the houses of today there was no den or family room so much of our time was spent around the table in the kitchen, this was the heart of our home.

I remember the milkman tapping on the back door, calling out a cheery Good morning, milkman, and coming right on in. Doors were always left unlocked whether anyone was home or not, just imagine what would happen if we did that today. He would check the icebox, yes, that’s what mother called it even after she got an electric refrigerator. The milkman would see what we needed, milk, butter, or eggs, and put the new items in. The milk was pasteurized, but not homogenized and the cream rose to the top. Mother used to pour the cream off for me to drink; she believed children needed to have real cream. And to this day, I’m not very fond of milk, but, oh, how I love real cream!

I remember coming in from grade school and running straight to the kitchen to see what as cooking and to sneak a bite or two. One of my favorite snacks was when mother had pinto beans cooking on the stove and she would give me a small bowl of them, the wonderful taste lingers in my mouth even now. There was no recipe, she just cooked and seasoned to taste.

I remember World War II and the difficulties of war rationing. Mother loved to cook cakes, pies and cookies and the biggest hardship for her was the lack of sugar. 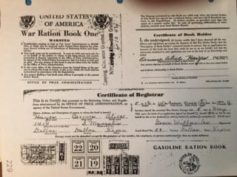 But mother and her friends would get together and trade food stamps they didn’t want for ones they did want. She also learned how to substitute honey and molasses and mother kept those wonderful smells and tastes in our home.

Mother was the COOK in our home, I was never allowed to cook very much; food was too expensive to be wasted. There were a few things I could do such as stir the yellow coloring into the margarine. When margarine first made its appearance it was white and you had to mix in yellow food coloring if you wanted it to look like butter.

Mother had a huge collection of recipes, some from her mother and grandmother along with lots from family and friends. She treasured each and every one and wrote little notes on the recipe cards telling the year she got it and who it was from. She would also make notes on the card about who she cooked it for, such as Made this for Christmas 1971. And tucked in among the recipes were other little treasures, notes, jokes, poems, and a 1923 Children’s Party Book. There are even recipes for catsup, condensed milk, mincemeat, fudgsicles, pimentos, and how to make lye soap!

One of the jokes I found was:

Mother:  Tommy, I wish you’d be a good boy.
Tommy:  I’ll be a good boy for a nickel.
Mother: Why the idea! When you father was a boy he was good for nothing.

When I started trying to divide up mother’s recipes between my daughters and me, I found I could not give any of them up and a cookbook, At My Mother’s Table, was birthed. It was a labor of love and done on the very first Mac computer. Needless to say, there were lots of things I could not do on it such as page numbers! It would be so much easier today!

September 5 is mother’s birthday and I want to say Happy Birthday by sharing one of her recipes, my dad’s favorite cake. Nothing pleased my dad more than good food and good company and nothing pleased mother more than cooking!

Mix sugar and oleo and cream good.
Add eggs one at a time and beat good.
Add flour then sherry.
Bake in greased and floured tube pan at 325 degrees for about 45 minutes.

We all miss you and would love to sit at your table one more time!

Picture of mother and dad at their 40th Wedding Anniversary Party 1982
Picture of US of America War Ration Book May 5, 1942

Betty Kerss Groezinger, a native Texan, was born in Dallas. She was a legal researcher for President Harry S. Truman in Independence, Missouri, taught business courses at Rockhurst College in Kansas City, Missouri, and on her return to Dallas, she worked for more than a decade with advertising agencies. She has been a resident of Irving, Texas, since 1965, and is now working on the sequel to The Davenport Dilemma.
View all posts by Betty Kerss Groezinger →
This entry was posted in Birthday, General, Memories and tagged childhood, cook, Happy Birthday, mealtime, milkman, Mother, mother's table, recipes, Sherry Cake, war rationing, World War II. Bookmark the permalink.

8 Responses to At My Mother’s Table …