December 7, 1941, a date which lives in infamy … and tears flowed all over America 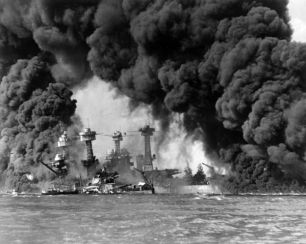 It has been 74 years since that vicious attack. It was one of those times in our lives where the memories are embedded forever. I remember exactly where I was—it was a Sunday afternoon and I was playing jacks with my best friend on her front porch. Her dad came out and said “Girls, I need to talk to you, come on in the house.” He started by telling us that we were all right and we were safe. Then he told us about the attack on Pearl Harbor and that America was officially at war. He didn’t scare us, but he did explain what it meant for our country to be at war.

Our country was stronger back then and the only attack on American soil was Pearl Harbor. It is significant to remember that this happened just as our nation was coming out of the great depression. Everybody’s lives changed drastically at that time. Bomb shelters were built around our city; we had bomb drills in our homes, schools, and in workplaces. Life was no longer predictable or normal. Many of my friends’ fathers and brothers joined the war, and, as time passed we began to see blue stars in the windows of houses as we walked to and from school. We knew that meant someone’s husband, father, son, or brother was fighting in the war. A silver star stood for a wounded soldier. If we saw a gold star, we knew someone had been killed. At that time America was so strongly based in God that the tears were cleansing, and we were united in our efforts to keep America free. When the World War II ended, there was a time of great rejoicing and celebration and rebuilding of lives.

It is said that people and nations are defined by their past. As I look at where our nation is today, the tears flow again, and I wonder if we will every see the peace that lived so briefly in the 1950s. The Korean War reared its ugly head during that time period and went almost unnoticed except by those gallant warriors who were fighting it.

In 1962, a Supreme Court ruling separated Christian principles from education and government and said, “No prayer in schools.” This was followed in 1963 by the removal of the Bible from our schools.

November 1963, John F. Kennedy was shot and Camelot ended. That was the day people began to realize that America’s innocence had been lost. Our country spiraled rapidly down at that point, and it became a “Get it while you can” world. Materialism whirled upward and we saw the birth of the “Me generation.”

In 1965, America officially entered the Vietnam War and our nation deserted its warriors. We failed our soldiers, but they didn’t fail us. They fought valiantly against an enemy that included men, women and children, and then they came home to criticism. It is a war that still hangs over America’s head as a dark cloud. And my tears flowed.

Next came the great search for significance, for who am I, for where is my place in the world, for “righteous” causes, all in an effort to fill the gaping hole in people’s hearts for where God should be. They tried to fill this void by seeking gratification in selfish pleasures, unwholesome activities, sexual freedoms and perversions, tolerance of ungodly things, and lifestyle freedoms, and the great teacher became television. In the following years, television promoted the “I’m worth it” theory and America grabbed on with both hands.

America’s problems grew. Materialism continued to climb upward. Instead of needing clothes, youth now needed name brands to make them feel worthwhile. Only the best of everything would suffice. Television taught that not only “You are worth it, but you deserve it.” Drugs increased despite all the “Just say NO” campaigns. Violence was no longer just on television, but also on the streets. Sexual freedoms of all sorts became commonplace and accepted; sex and nudity became explicit on television. Television became the great babysitter and the content was not monitored. We became a nation so tolerant that many felt it was wrong to object to anything, now known as political correctness.

On September 11, 2001, my tears flowed again. America was invaded, this time on our own soil and people were brought to their knees in prayer. I was in Montana near Glacier National Park and this day will be forever etched in my mind. My home-bound trip was astounding. As I drove through the states of Montana, Idaho, Washington, Oregon, California, Nevada, Arizona, New Mexico, and into Texas, I saw American flags displayed everywhere from homes, buildings, cars, and even inside restaurants. People were once again open, friendly, concerned with a common cause. God was now on the lips and minds of countless Americans. But sadly, it didn’t last—America forgot its values again.

Today, we face a war on American soil, with an indeterminate enemy who is much like Satan. We can’t see him, we can’t find his dwelling place, we don’t know where he will attack next, and we don’t know exactly how much power he has.

This is a war for the soul of America and it will be fought on our knees and in our hearts and with our tears. It’s time for each of us to take a hard look at our lives and root out the things we know are wrong, and to take a repentant look at our souls. It’s time for each of us to realize that God is in charge, that He is fully and completely capable and deserving of our reverent praise, obedience, and loyalty; and that our ultimate safety lies only in Him. Then we need to get on our knees in a firm commitment to pray daily for our saddened nation, for the people of our country, and for God’s will to be done in each of us.

Only then can America be what God wants us to be. Only through God can we be conquerors. Only then can we fill the gaping hole in America’s soul.

Betty Kerss Groezinger, a native Texan, was born in Dallas. She was a legal researcher for President Harry S. Truman in Independence, Missouri, taught business courses at Rockhurst College in Kansas City, Missouri, and on her return to Dallas, she worked for more than a decade with advertising agencies. She has been a resident of Irving, Texas, since 1965, and is now working on the sequel to The Davenport Dilemma.
View all posts by Betty Kerss Groezinger →
This entry was posted in America, General, God and tagged 1941, 1950s, 2001, a date which will live in infamy, American soil, Camelot, December 7, Kennedy, Korean War, Pearl Harbor, political correctness, prayer, Roosevelt, Sept. 11, tears, television, Vietnam War, war, warriors. Bookmark the permalink.

4 Responses to December 7, 1941, a date which lives in infamy … and tears flowed all over America